Ireland’s team for the Longines FEI European Show Jumping Championships has been announced.

The first championship team to be declared by Ireland’s new show jumping manager Rodrigo Pessoa will compete at Gothenburg in Sweden from August 23rd to 27th, 2017.

The four riders and horses are:

Ireland’s reserve rider will be Mark McAuley with Miebello.

Pessoa commented on his hopes for the European championships, which take place every two years: “As of today, I think this is the best team that Ireland has to offer, and on paper has the potential to fight for a team medal and maybe an individual medal as well.

“Since the beginning of the year, we have tried to instill transparency and good communication with our group of riders. I hope the riders and owners all appreciate that. Now, for the next few weeks, our goal is to keep the horses healthy and to get ready for our first big championships together.”

This is followed by the first round of the team competition on Thursday 24th, before the European Championship team medals are decided after the second team round on Friday August 25th. The final individual medal competition takes place on Sunday August 27th.

The last individual medal at the championships was won for Ireland by Peter Charles, who claimed gold in 1995 at St. Gallen in Switzerland on La Ina. 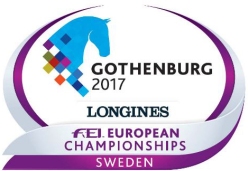