“David is based out of North Carolina and I‘m based out of New Jersey,” Amanda told We Live Horse this week, “and therefore we spend every Monday flying to spend a day or two together. So after living together in our house in Wellington, Florida for six months we spend the summer living apart, which with this industry and sport is very common.”

The couple, who announced their engagement last month, have no wedding date set, but Amanda says: “We’re planning a destination wedding at an island somewhere, which has yet to be decided – it is our dream to get married near the sand and the ocean.”

What is unusual is that while David is part of an ever-growing and highly successful community of Irish international riders based in the US, Amanda, as far as she knows, is the sole top British rider of her background to settle in the US.

“I suppose I just got lucky,” she says. “Some young English people will come over here to work for different barns, as I did, back in 2009, but I’ve now been seven years with Becky and David Gochman’s Baxter Hill Farm. Originally they were into the hunter scene, but I think they picked up my enthusiasm for the jumper classes, and now support me fully.

“I’m also helping with the training of the Gochman’s two girls, Mimi and Sophie, who are up and coming young talents in the junior ranks.”

Though not often referenced by British equestrian publications, Amanda, who hails from Leyland in Lancashire, is now ranked eighth of all British riders included in the Longines FEI World Rankings table.

“Again, I was very fortunate this year to have four horses capable of doing four star shows, so I’ve been doing a lot more of the big competitions with ranking points, “ she says.

With the Irish-bred Luibanta BH, 29 year-old Amanda placed an impressive fourth in the recent HITS $1m Grand Prix, and with the same horse was third in the CSI4* Devon $225,000 Sapphire Grand Prix. With Lady Maria BH at Devon, she took second place in the $40,000 Speed Stake and first in the $35,000 Speed Derby.

Amanda’s accumulation of results at Devon led to her being named Leading Rider, Leading Lady Rider and Open Jumper Champion. She picked up a similar award – Leading International Rider – at Washington International, and also made her debut as a member of the British team at the Nations Cup in Wellington, Florida, riding Luibanta BH.

David Blake, meanwhile, works for Howard and Gwen Dorkin in Carolina and runs a business known as Pine Hollow. He is the son of Michael Blake, Ireland’s Show Jumping Development Team Manager.

Amanda says: “We both have a passion for travelling and seeing the world, and try to see a couple of different countries every year whenever we have some downtime from shows.”

Before she left Britain at the age of 21, Amanda had trained with future Olympic medallist Nick Skelton. Today she is higher in the Longines rankings than not just her former mentor, but other British luminaries such as William and Robert Whitaker and Jessica Mendoza. 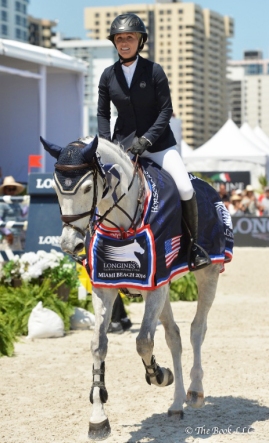 Amanda, who competes in New York’s Central Park Horse Show this week, says: “I think I was very lucky in finding a family like the Gochmans, and of course the horses that have been responsible for those great results.”