April sees a new event in the Irish equestrian calendar with the launch of the The Irish Sport Horse Industry Awards.

Hosted on the night by RTE Dragon’s Den star Gavin Duffy, the ceremony will take place in the Radisson Blu St Helen’s hotel, Stillorgan, Co. Dublin, on April 22nd, with nominations for the various award categories closing on February 19.

The organisers describe the awards as “an opportunity to recognise and celebrate the most original and innovative individuals, companies and organisations that have continually demonstrated excellence in the sector” and already they have received the blessing of some of the industry’s top players.

Dr. Noel Cawley, former Chairman of the Irish Horse Board and currently chairman of Teagasc said: “It’s an absolutely marvellous idea. It will provide a motivating influence across the industry and the sport; in the breeding sector especially giving proper recognition to the contribution of breeders, something which has been lacking at this level until now.”

Well known producer and dealer Barry O’Connor also gave the awards his imprimatur, saying: “Having organised the Showjumpers Club Annual Awards for a period of 10 years, I’ve always felt that it was a pity there was not one all-embracing awards system and event, covering all sectors of the sport and the industry. Anything that brings media and public attention to equestrianism and the equine industry is to be welcomed; I think this project is a very positive move.” 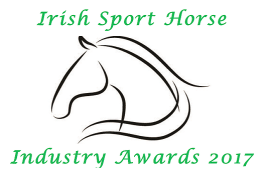 Meanwhile, Sport Ireland’s CEO John Treacy has also welcomed the awards by saying: “It’s a super idea and we will support it in every way we can. My only wish is that it should become an annual fixture in the calendar.”

The brainchild of Liam Geddes, owner of the monthly publication “Ireland’s Horse Review”, the new Irish Sport Horse Industry awards will be open for nominations in 15 different categories on February 4.

Further details on the The Irish Sport Horse Industry Awards may be found here.